The exhibit for April in the Local History display case is a selection of early 20th century color postcards showing Kingston buildings and places.

Stop by and take a look!

Lying at the foot of River Street, the Town Landing provides access for boaters to the Jones River, as well as a lovely place to sit and watch the water flow into Kingston Bay.  These two photos were taken by Ted Avery in April 1975.

Forty years earlier, this was the site of one of Kingston’s Emergency Relief Administration (E.R.A.) projects. Between April and August 1935,

Edgar W. Loring donated the stone, while Dr. Arthur B. Holmes contributed the pilings.  When complete, the entire project cost $3191.04.  Asked in the final engineering report how the public benefited from the project,  George P. Holmes, the Town’s E.R.A. Administrator, replied “This wharf at present is the only public landing place for fishermen and yachtsmen in Kingston and the extension to low water mark is greatly appreciated by same.”

More recently, in 1997 the Massachusetts Office of Coastal Zone Management gave $32,000 in Seaport Bond funds to the town, allowing the Waterfront Committee to replace older wooden floating docks (visible in both photos) with 20 modular aluminum versions. In 1999, Chris Tura completed his Eagle Scout project by dedicating the “Independence Memorial Park” at the Town Landing, complete with a historical marker, granite curbing and refinished picnic tables and benches. 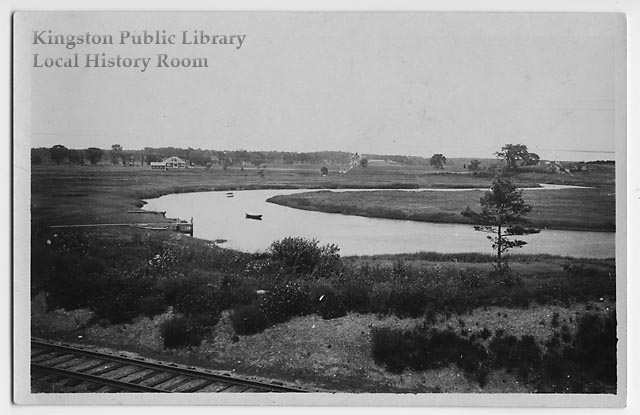