This month’s exhibit celebrates summer in Kingston with picnics and parades, fresh sweet corn from the farmer’s market, swimming, fishing, and just lounging on the grass eating ice cream.

Here’s the front of a float in Kingston’s 200th Anniversary Parade, which rolled on August 20, 1926.  The four boys behind the float seem very interested in whatever’s going on behind that shack…

The Local History Room is closed through August 1.

Some time ago, an unknown photographer captured this moment of tranquility on the river.  The Old Colony Railroad bridge can be seen in the distance at left, along with at least one of the boathouses that stand between Landing Road and the riverbank. The stone wall at right is the end of the seawall (or river-wall) that runs from the Great Bridge along the property that was once Alexander Holmes’ Jones River Farm.

Kingston’s storied history of building ocean-going sailing vessels stretches from about 1713, when shipwright Samuel Drew and his son Cornelius set up shop on the Jones River, until 1874, when Edward Holmes launched the brig Helen A. Holmes, or perhaps until 1898 when Edward Ransom built only Kingston’s only steamer, the Tiger. As the era of great sailing ships passed away, for a short time Kingston ruled the yachting world.

This month’s exhibit highlights some of the knockabouts, catboats and spritsails built in Kingston and raced in local waters by members of the Kingston Yacht Club, whose annual regatta is this weekend.

The Friends of the Kingston Public Library are offering a lovely set of notecards featuring 12 historic scenes of Kingston from the Local History Room.  Some larger prints of these photographs are on display in the lobby.  Please stop by, take a look and if you like, pick up a box of cards for the low, low price of $10.

This photograph just turned up in a recent donation to the Local History Room.  It has no date, no place, nothing beyond the image itself.  Context and best guesses, however, suggest that it dates to the late 19th century and shows the interior of one of the small boatyards on the Jones River.  Further, the vessel under construction very likely belonged to a member of the Holmes family.  More research may turn up additional information.  In the meantime, enjoy the unusual view.

In the 1948 Annual Report of the Town of Kingston, the Board of Health reported:

On October 20th, 1948, a fin-back whale came ashore north of the town pier [today’s town landing] at the foot of River Street. Measuring 42 ft. in length and weighing approximately 30 tons, this would ordinarily have been a human interest story, but it developed into a Board of Health problem when this Board was forced to dispose of the mammal.  Our Highway Department with the assistance of power machinery, loaded the whale on a heavy-duty platform trailer and carried it to the Town Dump where it was suitably buried.

After the dump closed a few years later, the Kingston Drive-In was built on the site.  Today this location is occupied by Summerhill Plaza, so yes, indeed, there is a whale buried under the Stop-n-Shop! 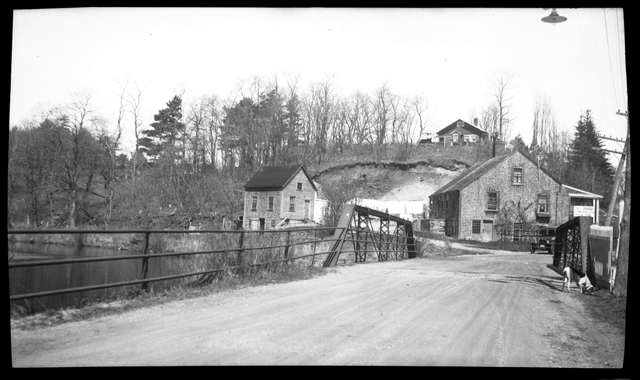 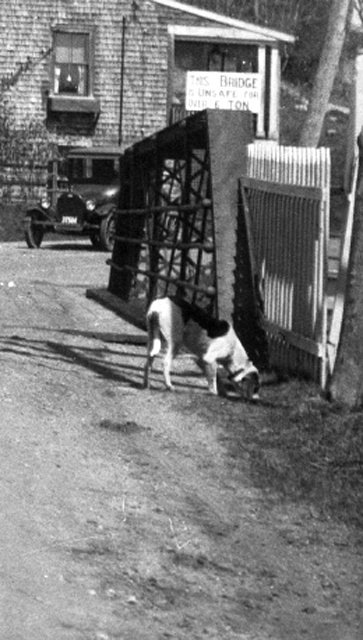 Kingston’s municipal water system was proposed at Town Meeting in 1884, legislated in 1885 under “An Act to Supply the Town of Kingston with Water,” and implemented in 1886.  The system officially began operations on August 10 that year.  While the actual water supply came from wells, Jones River water power supplied the mains and the reservoir (see this earlier post) via  “a Blake duplex power pump…capable of…228 gallons per minute…driven by a 30-inch Burnham turbine water-wheel of 17 horse power,” according to the Water Commissioners’ Report, March 1, 1887. Though the station was electrified around 1905, the system relied primarily on inexpensive and traditional water power through the 1930’s, except in times of low water or during repairs to the dam and equipment.

As early as 1704, the water privilege on the north bank of the Jones River at Elm Street powered industry: a grist mill was replaced by a fulling mill, which preceded a shingle mill. Finally, the Town bought the rights to the water power and built the pumping station.  Here are two views from the south side of the Jones River.  In the 1920’s a new concrete dam replaced the old wooden version, shown in the earlier photo.