From the 1870s until last October, Kingston had a drugstore on Summer Street. Tura’s Pharmacy has a long history, and it’s on display in the Local History Room’s exhibit case this month. Stop by the Library and check it out.

Just for the holidays! Stop by the Library and see Laddie.

This is Elspeth Hardy’s first grade class at the Faunce School (then called Center Primary) in 1915. 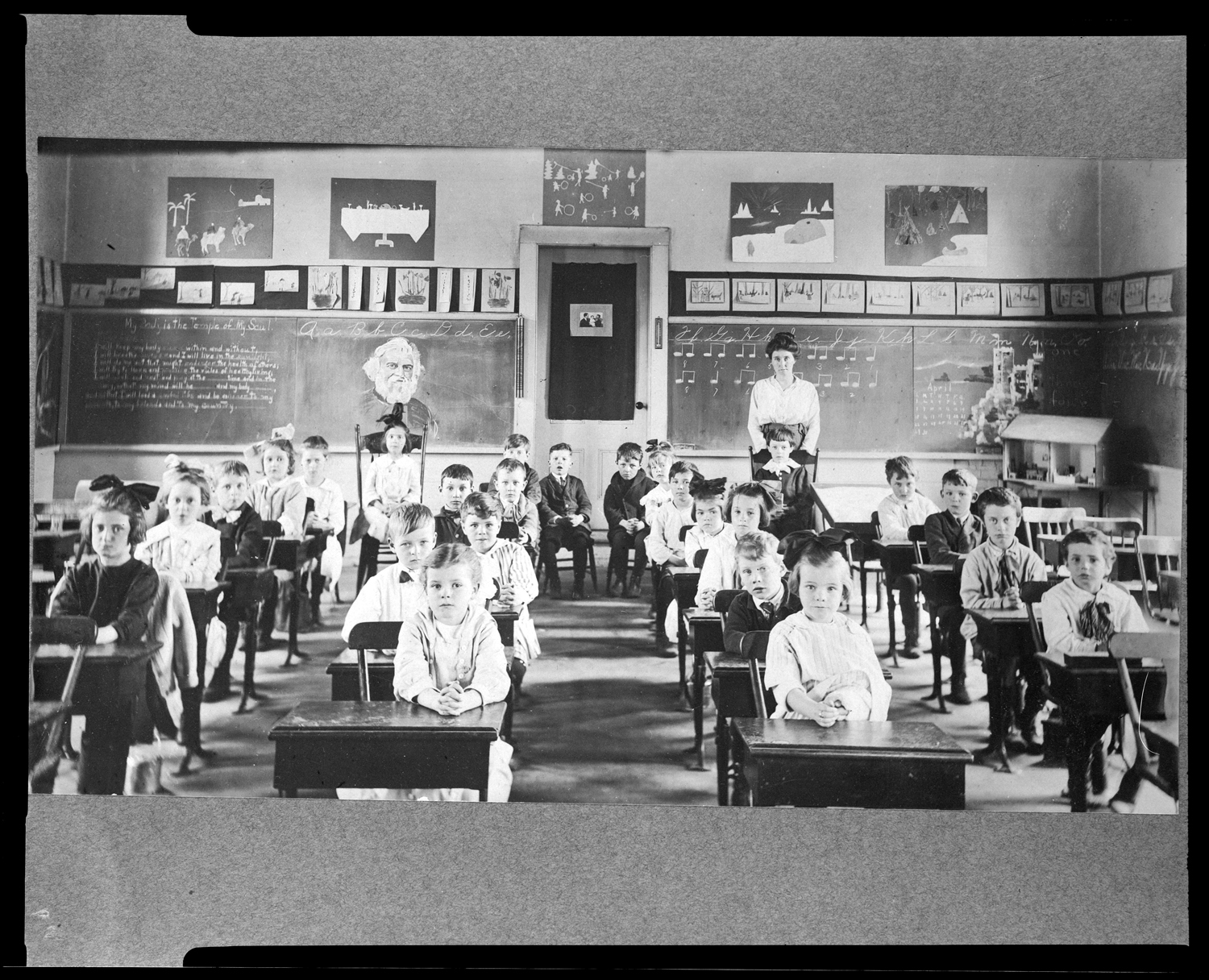 In 1928, she would help another group of students write a book, as she explains in the preface. 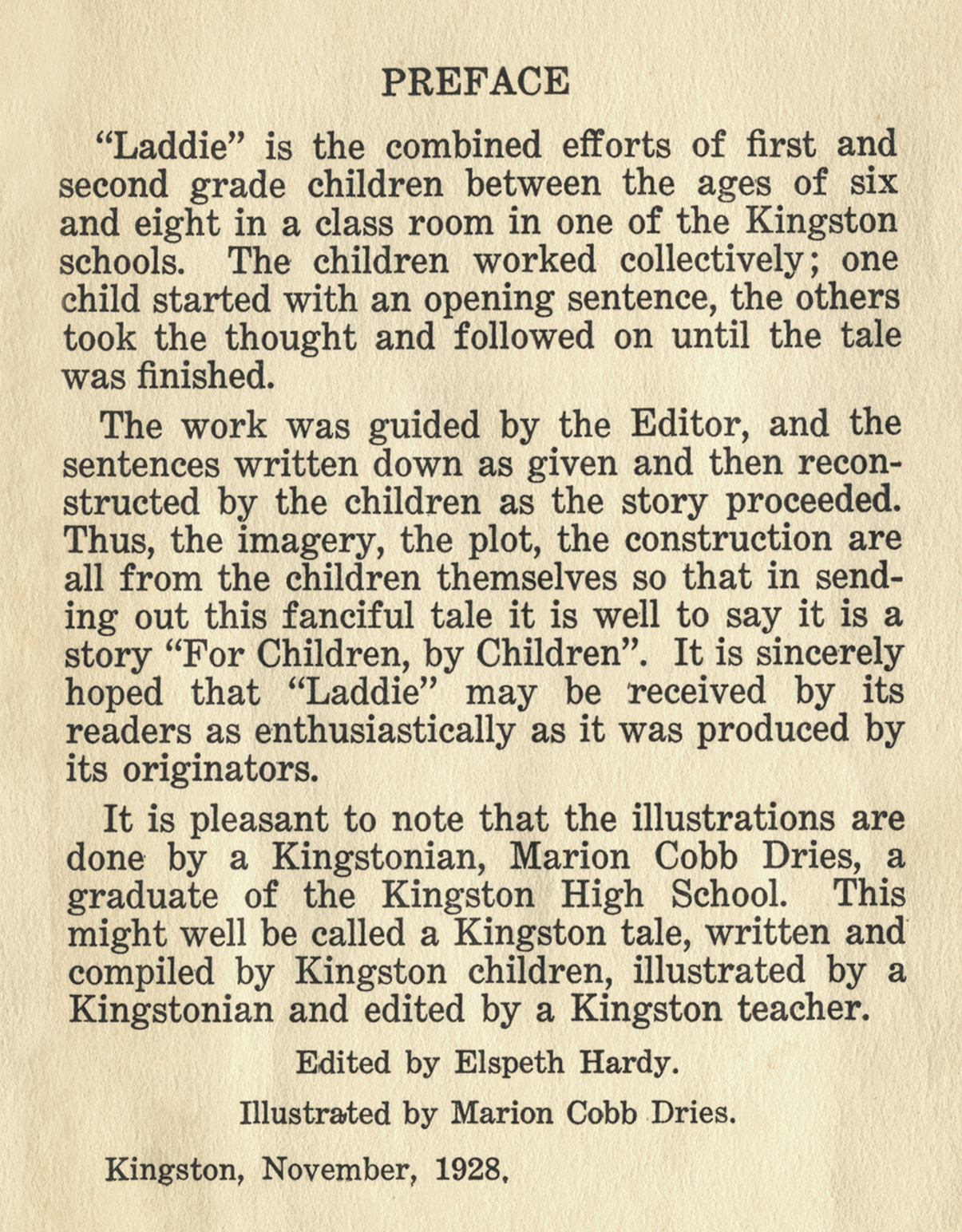 Do you have a library card?

If not, please stop by the Library and get one, and take a look at this month’s Local History exhibit featuring some older library registers and cards.

In 1920, the South Shore celebrated the 300th anniversary of the Mayflower’s arrival in a six-month frenzy of Pilgrim-related activities, including a sprawling outdoor pageant — more detail here — featuring Kingstonians like Emily Fuller Drew in full Pilgrim dress.

In 2020, just five short years from now, the 400th anniversary will be upon us, and the planning has already begun. The next meeting of the Kingston Historical Commission (June 10, 7:00 p.m. at the Kingston Town House on Evergreen Street) will feature a presentation from Plymouth 400, the group coordinating Plymouth’s commemorative events.

If you’re interested in this century’s version of a marching Viking horde, stop by to find out what’s in the works and what part Kingston can play. (Long-time Kingston Town Clerk George W. Cushman is listed in the pageant program as one of the Norsemen; maybe the incumbent can be persuaded into costume…)

These two negatives have no accompanying information whatsoever, but the intriguing rock formation may be the result of the glaciers that covered the area about 23,000 years ago, and could well show one of the “punch bowls” Emily Fuller Drew wrote about in her 1933 notes on places around town.

The Punch Bowls have almost disappeared, from the top of Stony Brook Hill. They were of glacial origin, huge bowls or “scouts” in the sandy glacial “dump”. Five of them where located within a short distance of Prouty’s Garage. The largest was where A.S. Parker’s Ice Cream stand is, north of Prouty’s Garage. This was used as a public dump for years, without making much impression on the hollow, then the stumps and trunks of the beautiful elm trees taken from Stony Brook Hill when the highway was “improved” were thrown there, and later material was brought from other place and the great bowl entirely filled in to make the yard which goes with the Parker place.

Two others, twin bowls, stood on the east (right hand) side of Tremont Street, beyond Prouty’s Garage. One of these was filled in, and the new construction caused by the widening and straightening of the road at that point completely obliterated it. The other, not noticeable from the highway because it is masked by a good growth of pine trees, probably still exists. A shallow one is being used as a public dump behind the “Garden of Allah Coffee House”, in the development called “Fort Payne”. The fifth is behind the house of Mr. Charles Childs at the top of Stony Brook Hill. All these Punch Bowls, almost perfect shape, were caused by the swirling of ice and water in the glacial period, of which Kingston has other interesting evidence.

In 1910, the first of many Fourth of July parades rolled in Kingston.

In honor of this most American holiday, here are a few views of one of our favorite floats from the inaugural year: the “Guardians of the Clam Flats.”

And now, a word from our sponsors…

If you can spare a moment, please help the Library Needs Assessment Committee plan for the Library’s future by sharing your thoughts and ideas in this short survey. Even if you don’t currently use the Library, we want your input.

For more, visit the Kingston Public Library, and the Local History Room, and the full blog piqueoftheweek.wordpress.com.

Despite the chill, spring has sprung so get ready to garden. Here are few inspirational but undated views by Emily Fuller Drew of her “Garden family.” 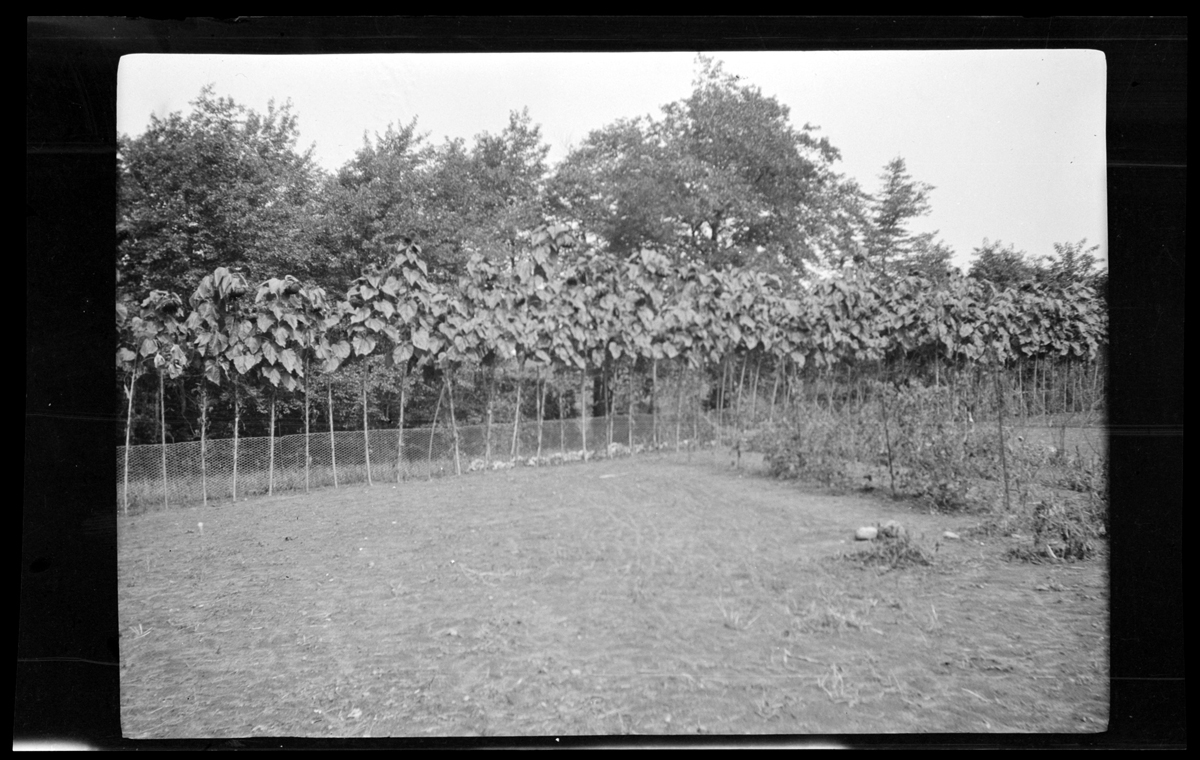 For more, visit the Kingston Public Library, and the Local History Room, and the full blog piqueoftheweek.wordpress.com