Thinking of those who are under-represented in archival collections, of the undocumented figures of history,  hermits have to be in the top ten, right?  That just doesn’t seem right, so…

here’s the story of Kingston’s famous hermit, drawn from a cabinet card, a few entries in town records, a newspaper article, a hand-written rebuttal and an anonymous letter.

Vital records provide the bare bones of biography: Daniel Weston Fuller was born to Consider and Hannah (Eaton) Fuller on January 5, 1812 and died of pneumonia on June 7, 1894, the year after his story was published in the Boston Journal.

In 1893, a reporter* traveled south to investigate “the trapper of Smelt Pond.” The story that followed – published on March 17, 1893 then reprinted in the Kingston News a few weeks later – romanticized the recluse with quaint, yet peculiar anecdotes.  He slept in a molasses barrel, renounced society over an unrequited love, and shot game with a muzzle-loader that had belonged to Daniel Webster, a friend of Dan’s brother Samuel.  Dan “educated” an owl for a pet and shot his own dog when “ ‘he got so dainty he wouldn’t eat raw potato skins.  Didn’t have any use for a dog such as that’.”

After moving out of the hogshead, Dan lived in a 12’ x 6’ hut, a former shoe-shop on Wapping Road later moved deep into the woods between Elm Street and Ring Road. He kept count of snowstorms with tick marks on one “greasy black” wall, and the number of mice caught on another. He festooned his small room with garlands of duck egg shells. What money he earned came from bounties on crows and woodchucks, once netting $17 for 34 heads, or from ducks brought to town, “really very nice if disassociated from the grimy hands that brought them.” His sustenance came from the forest, though in his later years, he did accept food, wood and tobacco from friends. The reporter noted that the hermit’s “piercing black eyes” turned sociable when presented with a gift box of fruit and bread.

The next piece of evidence appeared in response to the article: an unknown friend of Dan’s wrote to the editor that “there was no unrequited love in his case. He was a born son of the forest to begin with,” sleeping on a bed of leaves at 5 years old.  His family was “old fashioned even for them days 1820.”  Consider Fuller allowed his children to roam the woods, counting them every Sunday and “if they was all there or was not missing two Sunday mornings in succession, he was satisfied.”  Daniel’s defender noted that he made his living from the wilderness, selling furs and skins, wild honey and feathers for pillows, and stated that “Daniel cannot care for tomorrow.”

The last document is a semi-anonymous letter dated February 6, 1935, from Katie in Canton to her Aunt Addie recounting Roger’s memories of Dan the Hermit, including the well-told tale that he never washed.  There is not much more detail, but the letter does show that the hermit’s story was still in living memory more that 30 years after his death.  As late as 2003, the foundation on which Dan’s “rude hut” sat could still be seen, deep in the woods of Kingston.  Those stones, along with a yellowed clipping, a two page recollection and a single letter are all that remain to tell the tale.

*Emily Fuller Drew, who transcribed the article in 1938, believed it was written by Elroy Sherman Thompson, newsman, editor and publisher of the Kingston News.

This month’s exhibit is a glimpse into the long history of cranberries in Kingston. Stop by the Library to gather some trivia to show off at Thanksgiving dinner!

Throughout the 1800s, Kingston, along with Plymouth and Duxbury, provided clams to cod fisheries all along the Massachusetts coast. Clams were sold fresh for bait in the winter months, or steamed, salted and barreled for summer use. The region produced as much as 100,000 bushels a year. Around 1875, the shellfish – steamed and fried – became a sought-after delicacy, not only for New England clam bakes and shore dinners, but also in fancy restaurants in Boston, New York and Chicago for restaurants. Closer to home, shellfish

With Chapter 195 of the Acts of 1870, Massachusetts allowed towns to regulate shellfishing. In 1909, licenses to culture and harvest clams were issued by the Selectmen of Kingston, and the Bay floor was divided among the lucky license holders. The first license was issued to Fred Bailey for “one-half acre more or less.” The division of Gray’s Flats can be seen on the blueprint above.

During the 1920s, outbreaks of typhoid fever were traced back to local shellfish and many beds were closed. Some Kingston clam flats have remained closed since that time, while other areas were harvested into the 1970s. As the towns around Kingston, Duxbury and Plymouth Bays grew, pollutants increasingly affected the ecosystem, and shellfishing became hazardous. By 2002, however, efforts to decrease storm drain runoff and regulate septic systems had lowered pollution levels enough to allow Kingston Bay to be seeded with seven tons of cherrystones, quahogs, little necks and soft shell clams. In 2009, Kingston were again issued shellfish licenses, almost 100 years to the day after the original licenses were granted. Aquaculture is a new, and newly revived, industry in Kingston and surrounding towns.

All the recent snow reminded me of this photograph taken from Green Street.  It dates after 1883, because the Soldier’s Monument is there, but before 1928, when the trolley stopped running.

Once I found this one, I walked a little ways down Green Street to see if the view was the same.

In the 1948 Annual Report of the Town of Kingston, the Board of Health reported:

On October 20th, 1948, a fin-back whale came ashore north of the town pier [today’s town landing] at the foot of River Street. Measuring 42 ft. in length and weighing approximately 30 tons, this would ordinarily have been a human interest story, but it developed into a Board of Health problem when this Board was forced to dispose of the mammal.  Our Highway Department with the assistance of power machinery, loaded the whale on a heavy-duty platform trailer and carried it to the Town Dump where it was suitably buried.

After the dump closed a few years later, the Kingston Drive-In was built on the site.  Today this location is occupied by Summerhill Plaza, so yes, indeed, there is a whale buried under the Stop-n-Shop!

Published in 1899 by the Commonwealth of Massachusetts’ Topographical Survey Commission, The Atlas of the Boundaries of the Town of Kingston describes the 18 corners marking the town limits and the seven “triangulation stations” used to locate the corners. The Atlas includes the statutes that formally defined the boundaries, textual descriptions, a scale map of the town along with details of each corner, two tables of geographical data and nicely captioned photographs.

Among the readily identifiable landmarks, such as Monk’s Hill, the Kingston Unitarian Church and the Standish Monument, is one known to many but now gone: Nick’s Rocks.

Nick’s Rock on the line between the towns of Plymouth and Kingston, not far from Monk’s Hill is one of three rocks in Kingston which “testify” to the visits of the Devil as imprints of his feet and hooves prove “conclusively” that such visits were really made. The other two rocks are both called Devil’s Rock. One lies near Bay Farm and the other in the brick-kiln pasture near C. Drew and Company on Stony Brook.

Nick’s Rock was also used as a boundary marker for the town line between Plymouth and Kingston. Originally the rock marked the way for Nick’s Rock Road, which was the main road from the early Plymouth settlement. The road branched at the rock with one direction heading towards Plympton and the other towards the Flaxing Place at Smelt Pond.

situated in the boundary line between Kingston and Plymouth, in a thick growth of low scrub oaks, with scattering yellow pines, about 75 feet west of a wood-road.  It is a well know point being marked by a rock about 10 feet high and measuring 12 x 15 feet on the top, which slopes to the southwest.  A good view is obtained for miles to the south and west.

Nick’s Rock is gone now, though a marker in the median strip of the new Route 44 just west of the Cherry Street overpass commemorates this bygone stone.

For almost 50 years, Sylvanus Bryant ran a mill located on Sylvia’s Place Road between Bryant’s Pond and Soule’s Pond in the Indian Pond neighborhood of Kingston.

As far back as 1721, several water privileges existed on Furnace Brook, Trout Brook and the man-made ponds that connect them.  Around 1810, the Anchor Works (which actually produced spades and shovels) operated on the site of Bryant’s mill. Later, Daniel Bisbee and Henry Soule ran a nail and tack factory there.    Next was Thomas Russell, who also produced tacks.  In 1856, Sylvanus Bryant Jr. and Noah Prince set up a sawmill to make boards for boxes.  By 1879, Bryant had bought out Prince; he continued to operate the mill until 1900.

This view, taken from the O.W. Stewart Preserve (part of the Wildlands Trust of Southeastern Massachusetts), shows some of the buildings around  Bryant’s Pond. In the left foreground stands a small boathouse, and behind it to the right is the Bryant Boxboard Mill. Behind the mill, the Lyman-John Cushman house and barn can be seen, along with a dirt road that is today’s Sylvia’s Place Road. At the far left is the Deacon Cushman House, which today is 33 Indian Pond Road.

Source: Life on the River by Carrie Elliott, 2005

“April showers bring Mayflowers,” especially lately with all the recent rain and particularly in Massachusetts, where these fragrant little blossoms are our state flower. Commonly called Mayflowers, trailing arbutus or less elegantly, the gravel plant, Epigaea repens can be found hiding under pine needles and poking through fallen leaves, blooming between March and May anywhere from Newfoundland west to Michigan and from Saskatchewan south to Kentucky. The plant lies low on the ground with rust-colored hairy stems and leathery green leaves.

This image comes from a lantern slide and was likely taken by Emily Drew.  For a color picture, look here.

The clusters of dainty, fragrant pink flowers make a delightful and memorable bouquet. In earlier days, when woods were more abundant and available to children, when traffic passed more slowly, especially on a “Sunday drive,” many a child added to her allowance by gathering Mayflowers and selling the bunches of them at the side of the road. They were also a popular item in the May-Basket one hung on Grandma’s door to surprise her.

Have you ever made a bouquet of them? These unidentified ladies in an undated Emily Drew cyanotype might have. 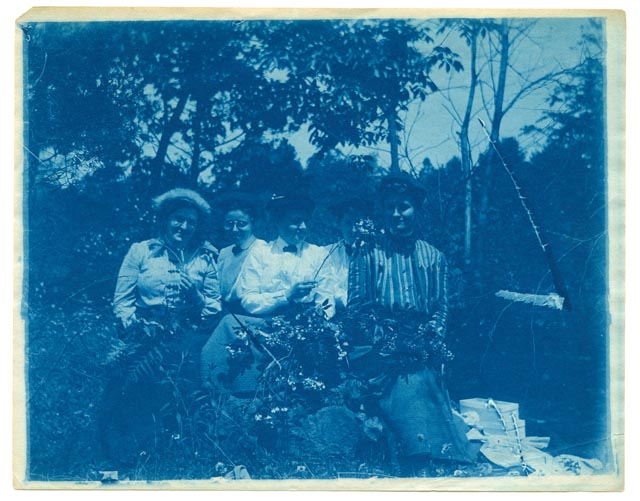 Women with flowers, no date