The four-trunk elm tree that stood on Main Street near Shirley Avenue was the stuff of childhood legend.  The sidewalk ran underneath and between the trunks so that a daring kid could ride a bike straight through, and a real heroic type would do it no-hands style.

The mighty tree fell victim to the ravages of Dutch Elm disease around 1959, and a little bit of childhood magic went with it.

I don’t know who he was or where he lived, but I believe that he loved his little dog friend. 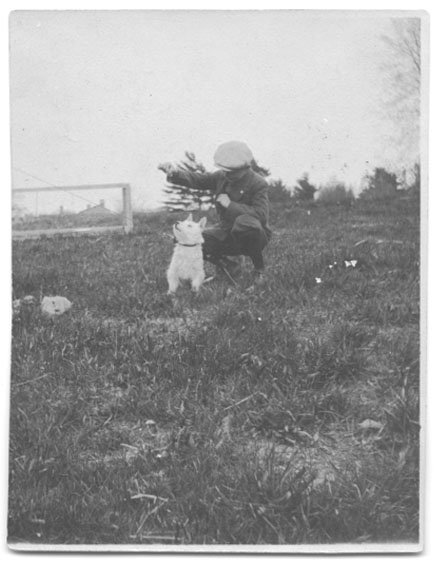 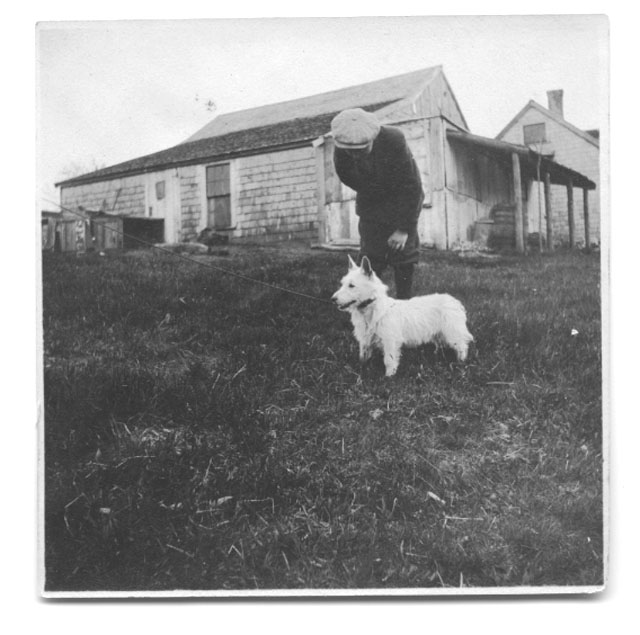 This month’s exhibit celebrates summer in Kingston with picnics and parades, fresh sweet corn from the farmer’s market, swimming, fishing, and just lounging on the grass eating ice cream.

Here’s the front of a float in Kingston’s 200th Anniversary Parade, which rolled on August 20, 1926.  The four boys behind the float seem very interested in whatever’s going on behind that shack…

It is now nearly seven weeks since you left here and as I did not write by the letter which was sent before, you will be out on me when you get home if I do not write now. The coutry is getting deeper and deeper into the troubles which she was just entering when you went away. Fort Sumter in Charleston, S.C. Harbor which was held by the United States troops was evacuated on April 6 (I think) after a heavy cannonading from 2 forts and several heavy batteries which lasted many hours. It was honorably evacuated with the Band playing Yankee Doodle after the American Flag was saluted by the 50 guns and drawn down. When this news reached the North the President immediately issued a proclamation calling for 75,000 men to aid in puttng down the “rebel combinations” in the South. Six regiments were ordered from Massachusetts. All the military companies in the town about here have gone Plymouth Plympton, Carver

2
Halifax &c. In passing through Baltimore our Volunteers were attacked by the mob and two killed. Many of the mob were killed. After that, the rebel mob burned down the bridges around Baltimore to prevent the volunteer[s] passing through that city. Now the troops have to be taken by water to Washington. On the receipt of the news of the evacuation of Fort Sumter Virginia immediated rebelled and 2000 men with 2500 more upon their heels hastened to Harper’s Ferry with intentions to take the 15,000 stands of which arms which were there and proceed to attack the Federal Capital. This attempt was happily frustrated by conduct of the officer in command and at the arsenal, Lieut. Jones who destroyed the arsenal and with a handful of men retreated through the midst of the enemy into Maryland. The Navy Yard at Norfolk, Va. together with several war vessels were destroyed by our troops to prevent their falling into the possession of the rebels. Fort Pickens at Pensacola, Fl. is now still in the possession of the Government but surrounded as it is by rebellion it will probably be attacked before

[3]
[a] great while, although it is hoped that it has been reinforced before this. This fort together with Forts Jefferson & Taylor at Key West, Fl. The rebels have had it mostly their own way so far but it is to be hoped that as soon [as] our forces get together we shall be able to retaliate upon them some of the injury that they have done us, take back some of the property of the United States, string up some of the traitors and that will be one step towards victory. Many think that they will never by be in the Union again. It is impossible to tell. The whole northern and western country is in a fever of excitement. The people are everywhere loyal and patriotic. The three colors, “The Red, the White and the Blue” are seen over the land in all shapes: in flags, cockades ladies’ bows, gentlemen’s neckties, in head-dresses, bonnets, &c. New companies are forming. there is one here that has got 100. They tried to get up one in Duxbury and got 7 men. I have now discussed the affairs of the nation quite thoroughly and will return to domestic subjects. I suppose someone has written to you that Mr. Tearnan has gone away. Mother has gone got Jerry McCarty

4
that used to work down at Mr. Delano’s. He is of course smarter that Mr. Tearnan and so far is very satisfactory. Mother bought a new cow six years old for 40 dollars, her calf came with her and went away to be killed yesterday. I set a hen three days ago. None have wanted to before. Jerry & I plowed the old garden yesterday with Katie and Mr. Cole’s plough. We shall plant carrots and beets at the first opportunity. John Griffin is going to take care of the piece back on top of the hill. The peas have been up some days. The lettuce onions and tomatos are quite tall in the hotbed. The peach buds are all killed by the winter. The apple leaves are starting. the lilac and other shrubs are quite green. I took off the double outer windows Thursday. Miss Moore went away Thursday morning. I have just been to see Miss Sever. She wishes me to remember her to your and hopes you will take card of yourself. Don’t forget every foreign coin you can. Remember me to Capt. Symmes & John. I remain, yours truly

Hope you enjoy yourself among the coolie girls

Without an envelope, there is not a single clue to identify Will and Tom. Others mentioned in the letter can be better described, and will be in the next installment.

This month’s exhibit is a glimpse into the long history of cranberries in Kingston. Stop by the Library to gather some trivia to show off at Thanksgiving dinner!