Kingston’s municipal water system was proposed at Town Meeting in 1884, legislated in 1885 under “An Act to Supply the Town of Kingston with Water,” and implemented in 1886.  The system officially began operations on August 10 that year.  While the actual water supply came from wells, Jones River water power supplied the mains and the reservoir (see this earlier post) via  “a Blake duplex power pump…capable of…228 gallons per minute…driven by a 30-inch Burnham turbine water-wheel of 17 horse power,” according to the Water Commissioners’ Report, March 1, 1887. Though the station was electrified around 1905, the system relied primarily on inexpensive and traditional water power through the 1930’s, except in times of low water or during repairs to the dam and equipment.

As early as 1704, the water privilege on the north bank of the Jones River at Elm Street powered industry: a grist mill was replaced by a fulling mill, which preceded a shingle mill. Finally, the Town bought the rights to the water power and built the pumping station.  Here are two views from the south side of the Jones River.  In the 1920’s a new concrete dam replaced the old wooden version, shown in the earlier photo.

On April 12, 1886, workers broke ground for the construction of a reservoir as part of Kingston’s new municipal water system. Located just south of Russell Pond off Round Hill Road, the reservoir was used by the Water Department until 1996. 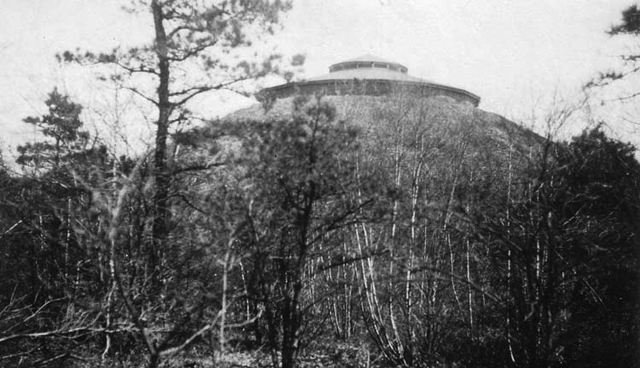 In his paper “Problems of the Water Department” read before the Jones River Village Historical Society on February 8, 1930, C.B. Hudson reported that

the reservoir is about 47 feet in diameter and 30 feet deep and was originally built of brick but, after several years of service, serious leaks developed in the bottom and a new cement bottom was laid over the original brick, and in 1923 when it was desired to increase the capacity of the reservoir it was completely relined, sides an bottom with 12” of concrete reinforced with steel bars and the new wall was carried to a height of 12 feet above the ground level which increased its capacity to about 400,000 gallons.

Sometime before the 1923 renovation, Emily Drew photographed members of her family  — her brother Clarence, his wife Charity and their children Norma and Bud — at the reservoir. 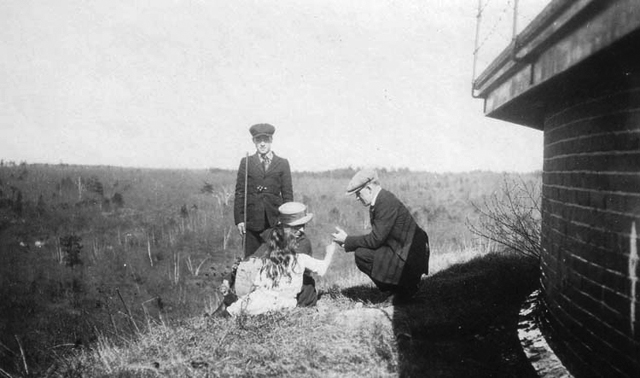 Bud, Charity, Norma and Clarence Drew at the Reservoir, circa 1923