Gray’s Beach Park is named for Edward Gray, who arrived in Plymoth Colony in the 1642 and eventually became one of the the richest men around. He owned land along what later became Kingston’s shoreline, including as this notable land record,  the site of  Kingston’s little beach.

And we know it’s Gray’s with an A, because, yes, it’s carved in stone.

This is Old Burial Hill in Plymouth, and Gray’s is one of the oldest marked stones there. The more legible of the two markers is actually a sign pointing to the original stone, which appears to be  in some kind of protective frame.  The related page on Find-a-Grave has some good modern close ups of the actual stone.

Our distinguished and beloved Town Historian!

Here’s a detail of an early brochure for the summer cottage development called Ah-De-Nah, circa 1930.  The name was pitched as a Native American term, but descendants of the developers, Edgar and Waldo Loring, might tell you it was just made up.

Why, thank you!
It’s good to be back.

In 1888, Henry R. Glover, a wealthy manufacturer of mattresses and “curled hair” from Cambridge, donated the “Henry Glover Watering Trough” to the town for public use. It was placed, and remains, at the Point, that triangular plot of land at the intersection of Main and Summer Streets. Glover was the son of Rev. Samuel Glover, a Baptist minister, who raised his family in the Samuel Foster House on Summer Street opposite the Point. The trough was a place for horses and dogs to drink after the town dismantled and covered the Point Well.

The following is a portrait of Frederick G. Brackett (1854-1941). In 1889, he purchased the house at 126 Brookdale Street, built by the Chandler family around 1790, along with the sawmill located off Hall’s Brook just east of the house.

Brackett continued to operate the mill (which burned down in 1924) and started a cranberry business with Samuel Lowe on the east side of Brookdale Street.

And he had an enormous mustache. 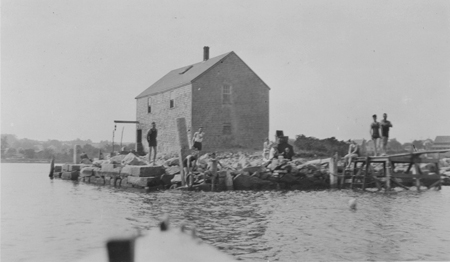 In honor of Father’s Day this weekend, here is a sweet moment captured by Kingston historian and photographer Emily Fuller Drew of her niece, Norma, jumping into the waiting arms of her father, Clarence Drew (Emily’s brother).

This photo from June 1924 shows an especially happy bunch of schoolchildren from the Center Primary School, renamed the Faunce School later that same year in honor of Walter H. Faunce, a former teacher, superintendent of schools, and town selectman.

Take a look at this snapshot of the 1946 Memorial Day parade as the procession, led by marshall Winfield Keene, exiting Evergreen Cemetery.